⚠This browser is out of date. ⚠
To ensure this website functions properly,
please upgrade your browser
or use a different one.
Skip to page contentSkip to footer

The gallbladder is a pear-shaped organ under the liver in the right upper abdomen. The gallbladder stores bile. Bile is a yellow, brown or greenish liquid made by the liver to digest fat. When food is being broken down in the stomach and intestines, bile is released from the gallbladder through a tube called the common bile duct. This tube connects the gallbladder and liver to the first part of the small intestine (the Duodenum). 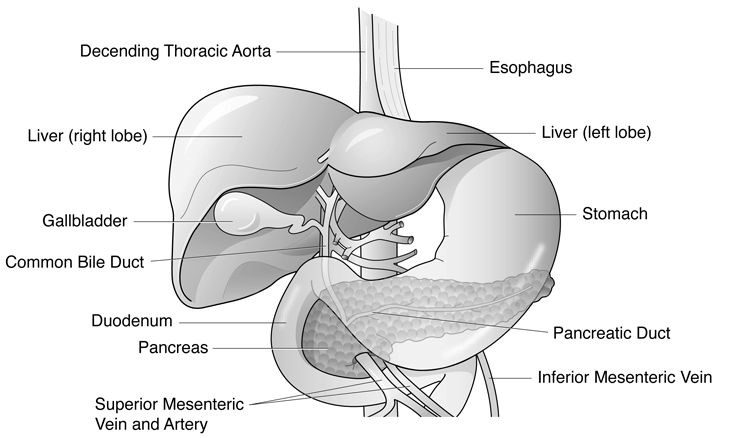 Gallbladder cancer is rare. Most of the cases are found when a patient has surgery to remove gall stones. The wall of the gallbladder has 3 main layers of tissue.

Cancer starts in the innermost layer and spreads through the outer layers as it grows.

The most common symptoms caused by gallbladder cancer are right upper abdominal pain followed by loss of appetite, nausea or vomiting. Fever and bloating may occur.

Jaundice
Yellow skin or eyes may happen if the bile ducts are blocked.

Recovery
Recovery and treatment options depend on:

Treatment options may also depend on your age, general health, and symptoms.

Gallbladder cancer can be cured only if it is found before it has spread or when it can be removed by surgery. If the cancer has spread, a treatment plan may improve quality of life.

Stage 0: Cancer is found in the innermost (mucosal) layer of the gallbladder only.

Stage I is divided into stage IA and stage IB.

Stage II is divided into stage IIA and stage IIB.

Gallbladder cancer that comes back after treatment.

Chemo uses drugs to stop the growth of cancer cells, either by killing the cells or by stopping the cells from dividing. This treatment can reach cancer cells throughout the body. Chemo may be used along with radiation therapy.

Clinical trials may be available using chemo with or without radiation

Your health care team may have given you this information as part of your care. If so, please use it and call if you have any questions. If this information was not given to you as part of your care, please check with your doctor. This is not medical advice. This is not to be used for diagnosis or treatment of any medical condition. Because each person’s health needs are different, you should talk with your doctor or others on your health care team when using this information. If you have an emergency, please call 911. Copyright © 7/2020.  University of Wisconsin Hospitals and Clinics Authority. All rights reserved. Produced by the Department of Nursing. HF#6701